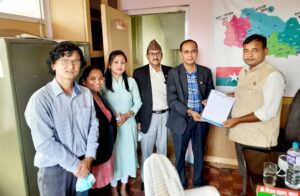 JuRI-Nepal led to hand over formal submission to all the major political parties to ensure fair and inclusive local election and memorandum was submitted on 21 February 2022, it was submitted through the secretariat of ESCR National Network.

Before the finalization of the memorandum, JuRI-Nepal organized a virtual interaction program with ESCR National Network on 18 February 2022.  JuRI-Nepal handed over the memorandum to Prime Minister Ser Bahadur Deuwa requesting to ensure women participation in upcoming election. The vent was conducted on 12 Nov. 2021.

The main objective of this submission was to pay attention of Major Political Parties and NHRI’s ensuring GESI and social inclusion in upcoming three terms of election and also to pay their attention to control unnecessary expenses in the elections by both political parties and their candidates.