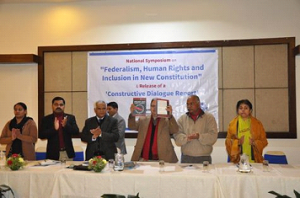 On 14 December 2014, Justice and Rights Insttitute Nepal (JuRI-Nepal) and Support to Participatory Constitution Building in Nepal (SPCBN) Project of UNDP jointly organised a national symposioum on federalism, human rights and inclusion in Kathmandu. The event brought together more than 100 participants,  mainly the leaders of major political parties, members of the Constituent Assembly, lawyers, human rights activists and journalists.

The event marked the culmination of the 27 interaction programmes held by JuRI-Nepal with the support of UNDP/SPCBN over the span of past two years in 27 districts throughout the country and was attended by 27 district delegates.

On the occasion, Honorable Anupraj Sharma, Chairperson of the National Human Rights Commission, released a report entitled “Human Rights and Inclusion as the Basis of Federalism: A Report of Constructive Dialogue”, the joint publication of JuRI-Nepal and UNDP/SPCBN. The report contained key recommendations and conlussions of local stakeholders voiced in the series of 27 events rolled out by JURI-Nepal with the support of UNDP.

One of the key objectives of the programme was to inform the political leaders and actors involved in drafting constitution about the messages of people and local stakeholders regarding federalism, human rights and inclusion, which continue to grip Nepal as its key agendas twoards achieving peace, development and stability.

JuRI-Nepal Chairperson Mr. Raju Prasad Chapagai made a brief presentation highlighting the key recommedations and conclusions of the report.

Delivering his keynote address, NHRC Chairperson Sharma stressed the need for engendering human rights and freedoms in the federal schemes of Nepal. He further said the issue of naming of the provinces and delineation, which has been of controversy in the current federal discourse in Nepal, is meaningless if application of human rights on equal basis for all is ensured in the federal set up. He, at the same time, lay stress on the need to set up an independent and competent human rights watchdog in each province.

JuRI Nepal is planning to submit the recommendations of the stakeholders to the Constituent Assembly soon.