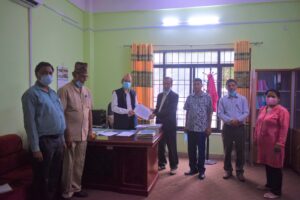 JuRI-Nepal and alliances of media organizations (including Federation of Nepalese Journalist) and civic advocates have been conducting regular advocacy to ensure the civic space as per the constitutional spirit. Due to the continued lobby and public pressure from larger CSOs and media organizations, Lumbini Province Government, replaced previous Media Bill and promulgated a new Media Bill with more than 50% of changes. The new Bill is tabled in the assembly on 29 April 2022. The Bill is under the process of discussion at the thematic committee. The new bill seemed progressive from media freedom and civic rights perspective comparing to previous bill.  In this initiation, JuRI-Nepal created a dialogue platform to discuss about derogative media Bill proposed by Lumbini Province and coordinated with more than forty CSOs (both national and province level). Larger CSOs network submitted a memorandum on Media Bill, 2077 disclosed by Lumbini Provincial govt. (Minister of Internal Affairs and Law through Secretary Ravilal Panta) on 26 July 2021.JuRI-Nepal identified that, some of the provisions of Bill are against the spirit of the constitution and federal laws. It is also identified that the Bill still curtails media freedom and freedom of expression. Before this submission, JuRI-Nepal in collaboration with ESCR Networks and Federation of Journalist Lumbini Province along with larger CSOs organized a virtual interaction program to collect views and inputs on the Draft submission on 25 June 2021. A total of 88 journalists/CSO activists attended the program and provided the inputs. See the submission on media bill to lumbini province.