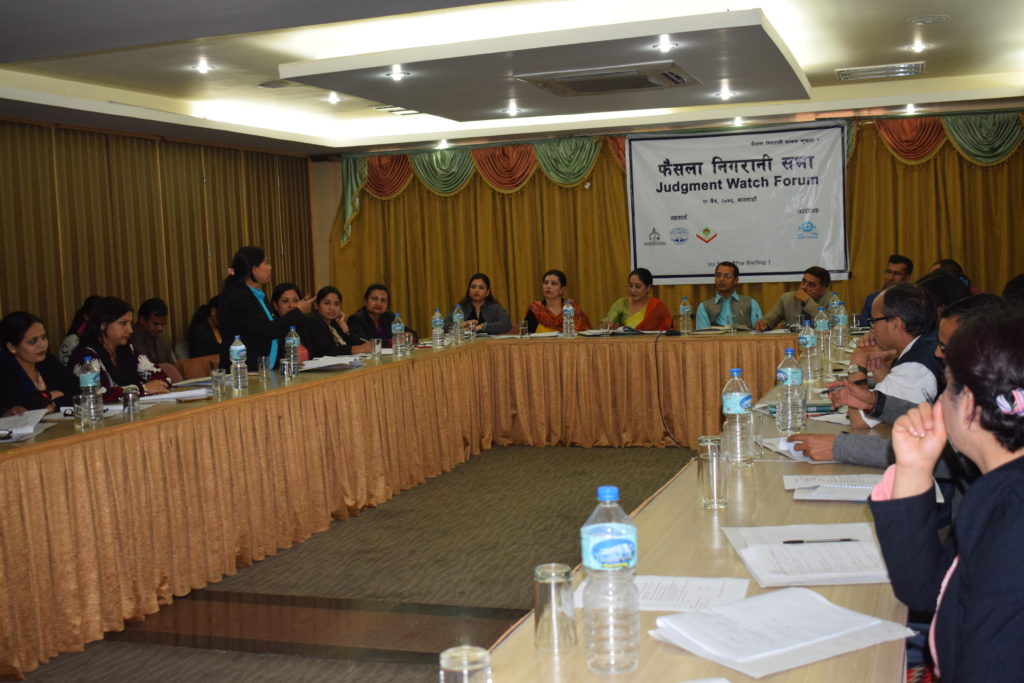 The Ministry of Information and Communication is likely to establish Advertisement Council in order to monitor and regulate advertisements from gender lens. Bigya Bhandari from the Ministry stated that the government will soon initiate drafting a specific law in order to regulate advertisements appeared in media outlets from gender perspective.  She was speaking at an event – Judgment Watch Forum jointly organized by JuRI-Nepal and the Women Cell of the Supreme Court Bar Association of Nepal, Sancharika Samuha and IHRICON.

JuRI- Nepal under the Access to Justice Project in partnership with the Governance Facility continues to organize Judgment Watch Forum. It aims at reminding and sensitizing stakeholders and duty bearers ensuring timely implementation of the Court Verdicts and other Directives. The Fourth Forum highlighted issues regarding gender sensitive media contents and the status of the Supreme Court Judgments in relation to gender friendly advertisement contents. A paper was presented by a noted lawyer Madhav Kumar Basent at the forum and it was followed by a plenary discussion.

Sudarsan Acharya from Press Council Nepal (PCN) at the event urged for the establishment of Advertisement Board so as to monitor media contents from the perspective of gender. The PCN, according to him, is in the process of drafting a Gender Responsive Code of Conduct.

Emphasizing the importance of the Censor Board, Dhruba Lamsal, Secretary of the Federation of Nepalese Journalists (FNJ), made commitment to make FNJ’s networks gender sensitive. Yeshodha Timsina, the Commissioner of the National Information Commission, highlighted the role of mass media in promotion gender sensitivity. Amrita Lamsal – a veteran human rights defender and the Chairperson of IHRICON urged all to make gender-friendly media.

Before closing the event, representatives from the forty-three Civil Society Organizations and government entities pledged to make work-places gender-friendly. In his concluding remark, advocate Raju Prasad Chapagai, the Chairperson of JuRI, appealed all to make an effort to get laws enacted and formed the advertisement board and comply with the code of conduct for mainstreaming gender understanding in all media outlets.