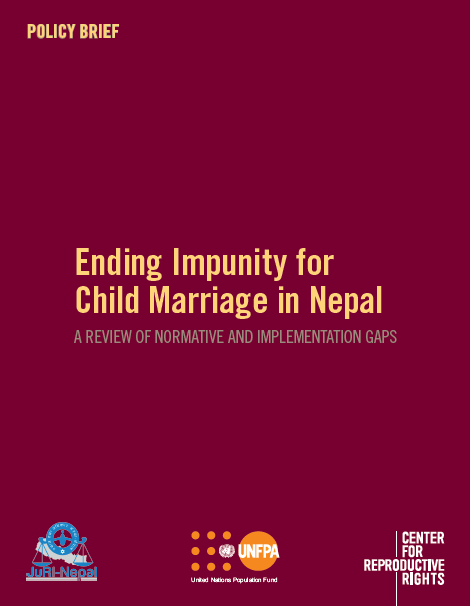 Child marriage is a crime. However, it is socially accepted and pervasive in Nepal. Justice and Rights Institute-Nepal (JuRI-Nepal) work together with other agencies, including CRR, UNICEF, and UNFPA in combating child marriage. It affects both boys and the girls, however, it disproportionately affects girls’ ability to enjoy their rights and freedoms, especially due to the serious risks of sexual and reproductive harms associated with this practice.

It triggers a continuum of reproductive and sexual harms and violations by exposing girls to forced initiation into sex and unprotected sex, as well as early, unplanned, and frequent pregnancies. Women and girls subject to child marriage are likely to face slavery-like practices such as servile marriage, sexual slavery, child servitude, child trafficking, and forced labor.

“Ending Impunity for Child Marriage in Nepal: A Review of Normative and Implementation Gaps” is a joint product of JuRI-Nepal, CRR and UNFPA. The purpose of this analysis is to identify and sensitize policymakers, law enforcement officials, and human rights defenders, on the key legal gaps and inconsistencies that have undermined efforts to address child marriage in Nepal, particularly in light of the constitutional guarantees, national laws, and international human rights standards.

It highlights multiple challenges faced in the implementation of the existing affirmative laws and makes linkages to other causes of systemic discrimination in law and practice that contribute to impunity. It puts forward a set of concrete recommendations for addressing the gaps and challenges in order to promote access to justice for the victims of child marriage. JuRI-Nepal has distributed the Policy Brief to the concerned stakeholders, including the government agencies. The recommendations of the Policy Brief in Nepali language can be obtained from JuRI-Nepal.