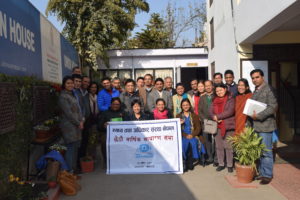 The executive board members elected by the AGM, are Nirajan Thapaliya, Bhagawoti Ghale, Tek Tamata, Saraj Thapa, Ratna Kaji Shrestha and Chun Bahadur Gurung. The newly elected Executive Board, including the Chairperson, serves JuRI-Nepal for the next two years.

In addition to the endorsement of the annual report, audit report and other policy documents, the AGM has mandated the newly elected board to intensify the strategic research, and advocacy on pertinent issues concerning long-standing discrimination, denial of economic, social and cultural rights and culture of impunity in the context of federalism. The AGM thanked to the outgoing Chairperson advocate Raju Prasad Chapagai and his team for demonstrating effective leadership since the inception.