The fifth annual general assembly (AGM) of the Justice and Rights Institute (JuRI -Nepal) held in Kathmandu, unanimously elected advocate Mr. Raju Chapagai as the new Chairperson. A Constitutional and Human Rights Lawyer by training, Mr. Chapagai served as a founding chairperson. The post was vacant since the former Chairperson Dip Magar tendered his resignation, citing personal and professional reasons. The assembly also endorsed nomination of Mr. Panakaj Kumar Karna and Ms Aarati Bista Rana as the General Secretary and Secretary respectively; they were nominated by the Executive Board (EB) meeting held in August.

Mr. Pankaj Karna presented an annual progress report and Ms. Aarati Bista on behalf of the Treasurer, advocate Mr. Shyam BK presented the annual audit report of JuRI Nepal and Ms Manju Lingdam – Finance and Administrative Officer elucidated it further. After an extensive discussion among members, advisers and life members, both annual progress and audit report were approved by the AGM. The Executive Director, MsTanuja Basnet highlighted organizational achievements, strengths, gaps and opportunities. The budget and program proposed by the General Secretary for the fiscal year 2073/74 was endorsed by the AGM.

The General Assembly, JuRI-Nepal’s top body, has mandated the Executive Board to effectively implement GESI policy of the organization in order to further enhance women inclusion within JuRI. The outgoing Chairperson Mr. Dip Magar at the end, acknowledged the cooperation he received during his tenure and thanked all and congratulated the newly elected Chairperson. The newly elected Chairperson Mr. Raju Chapagain extended his sincere thanks to all and vowed to act as per the AGM mandate to further consolidate the effort. The General Assembly was moderated by the Spokesperson Mr. Chun Bahadur Gurung and concluded by the Acting Chairperson Mr. Bhim Pariyar with vote of thanks. 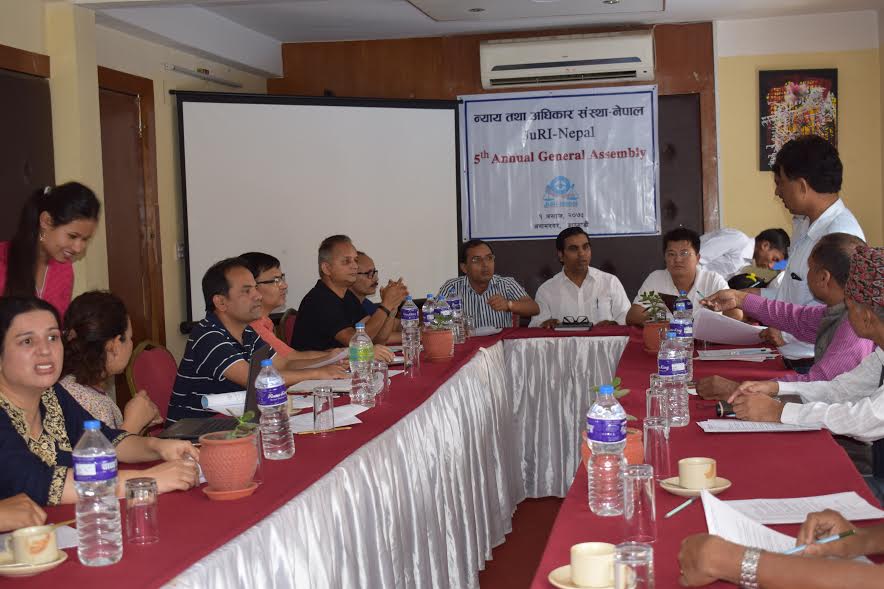